Well... My name is Magda, im from Poland but i am living in cold Ireland

I was playing on Oracle serv. (Global one xD) but... i am to lazy to lvl so for now I am playing on Fake/Xtreme

I dont have a hobby, can i add sleeping as a hobby??

iii love cat's xD All pets/animals but the most cat's <3 Ohhh! And i am female xD Anyway my English isn't very well but i dont care, I have still time to learn xD

Hi there, my name's Bob, most call me Jim

No really, real name is actually Christian. I'm older then alot of you probably, not dating myself by saying how old, I live on the west coast of Canada. Hobbies are fairly obvious, when not working or sleeping I'm usualy on Xtreme. Um, that's it I think?

Hiho,
I'm Duderino.
I'm 16 years old and live in Germany.
My hobbys are playing games on Pc and meet friends.
I love animals too, not all but enough ^^
I have a pet, a Dog.
But the rest is Private, on request ICQ and Skype adress. 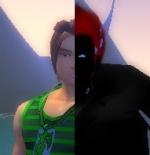 I'm russian and Israeli xD but I moved to the damn U.S but i am getting out of here asap <,< me no like it here.. no offense to any americans here :/
I draw, and im a total klutz xD give me air and i will trip on it ._. , I used to kickbox and box but my gym took me for a tourney and i used illegal move on my opponent and busted her eye pretty bad so i got kicked off my team <_< I haven't been in shape but im working on it again.. cos i wanna join my schools swim team xD annd errrr

I have msn facebook and skype, Im not giving you my skype or facebook but my msn can be requested

Ok thats it
I suck at introductions
baii

Im 34, from the UK, Played PW for over 2 years now (Since it was in BETA),
Always go for Werebeast characters as there simple to stat and I like to solo dungeons when I can.

Probably the oldest in the guild but then again not the oldest player of the fake Perfect World servers.

Oh well... It was inevitable that i would end up at this topic too some day, so brace yourselves

For the ones who don't know, I'm a guy.
hmm now what.. oh gawd I'm horrible at this..
Ok hobby's maybe? I play guitar and piano, and i love to sing too. CuteBow said i sing great (i don't believe squat of that).
I speak several languages. Dutch is my native language, but English is almost more easy for me. Besides those two, i speak quite some German, but it's really really crappy. If i ask someone where the snack bar is i end up at a graveyard.. that kind of stuff. Really funny at times, but annoying if you don't need it at the time.
Well, for the rest of the languages.... a few words Finnish, a little bit more words Hungarian and a little bit less french. And I wanna get to know polish too, but i'm still working on that.

I live in the Netherlands right now. I have lived in the United States for a brief period too (TX) but i moved back here. I can't wait to get out of this country again. SOMEONE KIDNAP ME!!!!!!!

OK looking back at what I've written so far, the need to say I talk a lot is pretty much gone... teehee

I hoped i would bump into some kind of character limit actally, but i guess they don't have those on here... Henri 1 forum 0!!!

A little bit on what i love and hate maybe..
I love rollercoasters and other thrill rides. I love laughing at the most horrid horror movies (and i hate watching a natural birth video.. makes me hurl).
Oh and i secretly got a crush on InYx and Batman too.

What i hate the most is Straight girls hitting on me. And that tends to happen often unless I'm on a date with another guy LOL. (Yes I'm gay. And some girls might ask "really 100% gay??" and yes, 100% so stop hitting on me rofl. im the only one that can hit on straight guys cuz i can turn em!!)

Well.. what else..
Sports!! I hate alot of sports! Soccer the most. A sport i'd like to practice is Archery(bow and arrow) since i have a natural talent for aiming (wink wink).
I've been on some other sports.. let's not go into detail about that, but it was about controlled fighting.

Right now at time of typing this i am unemployed. I'm trying as hard as i can but i can't find a job. (maybe anyone knows something?) My previous jobs were Storehouse worker, Work in a restaurant (both in serving and in the kitchen), and my latest job: Front office employee in a 4 star hotel.
And now looking for jobs lol.

If you still have questions (wich i will be amazed of if you have read this entire reply) just ask them either trough here, MSN, or ingame.
Just maybe you'll get a reply from me.

Hey, My name is Troy and im from Latvia. i know none know where it is. Its is in Europe, Close to Poland xD owh yeah almost forgot. im 18 years old. I dont love cats dogs or anything like that i just like them. Nice to meet u all

I live in Scotland, West Lothian.

Thats about it i think lol, nice meeting you all.

Hobbies: Making Sig's, Going out and having a laugh, FPW Xtreme rest of the time.

I guess some people already know me but..
Well Im Amanda :3, 17 years old and living in the Netherlands.
I love to play music!, I play on piano most of my free time. :3
And FPW for the friendly and nice people. :3
I don't know what to say anymore about myself, but If you wanna know something PM me.
Greets :3

Well my name is Ryan
I live in sunny California

I am the lead guitarist for a local band called Waiting For The Fall
i love the beach, surfing, photography, Guitar(obviously), and FPW during the down time.
Whenever the Vent is fixed I will Sing and play guitar for all of you guys and gals